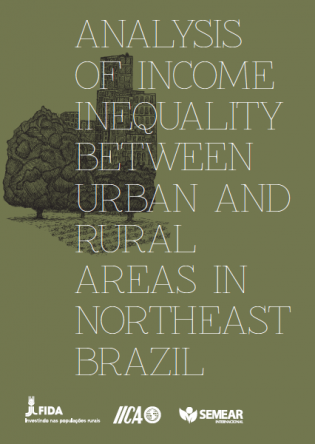 The International Fund for Agricultural Development (IFAD) has proposed, throughof the Semear Internacional Program, carried out by the Inter-American Institute ofCooperation for Agriculture (IICA), to prepare a study that aims to contribute tounderstanding the inequalities between the urban and rural regions in NortheastBrazil, in the sense of understanding intersectional or invisible issuesIn a first moment. The work aims to analyze the current level of income inequality between urban and rural regions, in order to understand what are the factors that explain these differences.

As a source of data, the UFBA team, responsible for the technical execution of the study, used the official government bases, guaranteeing a diversity of explanatory variables about individuals residing in different locations. The results found suggest the fundamental relevance of public policies focused on improving the productive structure of rural regions, giving even more prominence to those that aim to contribute to the increase in the formalization of male and female workers, one of the points identified as causing the greatest distance between labor flows income.